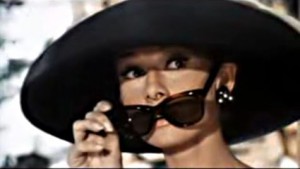 Audrey Hepburn as Holly Golightly in Breakfast at Tiffany’s
The 1961 film Breakfast at Tiffany’s and its lovable heroine, Holly Golightly, have defined New York City in the filmgoing imagination for almost fifty years. Pictures of Audrey Hepburn in her little black dress and big black glasses are sold at every souvenir stand in the city; formerly prosaic objects (pink lipstick, cigarette holders, brown-bag breakfasts) now boast an aura of movie magic. One of the most iconic of these images is the New York City townhouse where Holly Golightly threw her parties and sang “Moon River.” 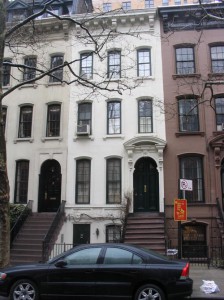 The film focuses on the romance of Holly and Paul, two young residents of a formerly single-family Manhattan townhouse divided into rental units. In his book, Celluloid Skyline, James Sanders calls the multi-unit New York City brownstone the “obvious locale for romance” due to the “domestic unity” of the building’s structure and the “solitary lives” of its renters. (Source: Movie Diva) In the eponymous novella by Truman Capote, the location of Holly and Paul’s brownstone is never specified. However, the film’s facade shots were done on location in front of an Italianate Style townhouse at 169 East 71st Street.
(The Italianate Style, for the curious, is one of the most recognizable and classic of NYC brownstone styles. It is easily identified by its pilastered doorway, long front windows, ironwork railing, and protruding cornice. [Source:Charles Lockwood's seminal work, Bricks and Brownstone.] Excellent examples of this style often appear among Manhattan brownstones for sale.)

For more information on townhouses for sale and other New York City Brownstones for Sale , contact Vandenberg — The Townhouse Experts TM. We specialize in townhouse realty.