One of Dexter’s favorite things about the Upper West Side community is the wealth of musical offerings around the neighborhood. So when he heard on the radio about Billy Bragg’s “The Big Busk” at Lincoln Center, he brought along his guitar and got ready to busk! 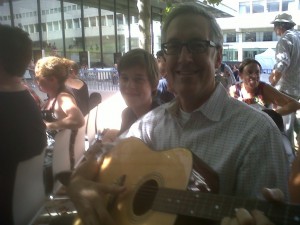 The rehearsal was terrific: hundreds of guitarists and onlookers jammed to songs like “Cecilia” by Simon and Garfunkel, “Daydream Believer” by the Monkees, and Billy Bragg’s own “A New England” along with Billy Bragg, the famous protest musician and self-proclaimed “busker.” Volunteers held up cards with the chords on them, so that even beginners like Dexter could keep up and have fun. 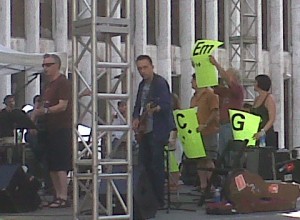 Later that night at Damrosch Bandshell, hundreds more people came out to hear the music-making! One Vandenberg associate also attended and was glad for the chance to hack away on the six-string at a few folk classics.
The Big Busk was part of Lincoln Center Out of Doors, a sensational free summer concert series. Any music-loving Upper West Sider should take advantage: the calendar is available at http://www.lcoutofdoors.org/
Are you interested in buying a New York City Townhouse? For more information on NY townhouses and New York City Brownstones for sale , contact Vandenberg — The Townhouse Experts TM. We specialize in townhouse realty.